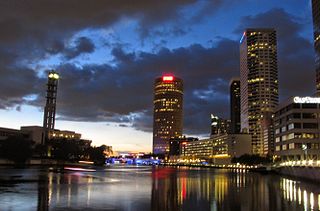 If there’s ever a time to explore the Riverwalk while eating and drinking your way through all downtown has to offer, it’s Fourth Friday. The monthly celebration first began in March of 2016 as a way to highlight Tampa’s culture and includes art and entertainment venues, food and drink deals, and live music. This month, the event is set to take place on Oct.28.

Fourth Fridays are very much for foodies. Once guests receive a free Fourth Friday wristband from participating venues that night (which vary for each event), they can get deals and discounts at some of the best restaurants around town.

For October’s Fourth Friday, Sip n’ Stroll will allow guests to walk along the Riverwalk while sipping on their favorite alcoholic beverage. As long as the drink is in a vendor-approved cup, guests are good to go.

Restaurants and bars around Tampa participate in Fourth Friday to not only offer great deals and specials, but to familiarize themselves even more with the people of Tampa. Fourth Friday deals are a great way to try out new places, without spending a lot of money.

Cafe Dufrain is offering happy hour specials; Taps, Bamboozle Tea Lounge, and Cena are offering 10% off your bill; City Dog Cantina is offering 20% off appetizers, and Pokeys Rock & Roll is offering 15% off your total bill.

The Sail, located right on the path of the Riverwalk, is offering a Riverwalk Runner Cocktail Special for $8; Franklin Sports Bar and Lounge is offering $4 beers until close.

The Tampa Theatre will have a buy one get one free deal on large beers for guests and the Straz Center is providing food and beverages from 4:30- 9 p.m. All of the specials as well as the restaurants partaking in the Fourth Friday event can be found on fourthfridaytampa.com.

Attending Fourth Friday means access to the art, music, and literature of Tampa. Downtown locations are allowing attendees free or discounted access to tour attractions like the Henry B. Plant Museum, Tampa Museum of Art, The Straz Center, the Tampa Bay History Museum, and the Tampa Theatre.

During August’s Fourth Friday event, The Glazer Children’s Museum offered a discounted admission fee of $5 from 4-6 pm. The last Fourth Friday, which took place on Sept. 23, included over 13 cultural attractions including the Florida Aquarium, Stageworks Theatre and the Florida Museum of Photographic Art. The full list of offers can be found on the Fourth Friday Facebook page or their website, though the October list is to be determined.

Although the event takes place along the Riverwalk, walking is definitely not the only option. There is street parking north of Kennedy, or parking near the Riverwalk is the best idea. Once you park your car, there are a few options to get to the different locations participating in the event.

If you’ve pondered the idea of what it would be like to boat along the Hillsborough River, now’s your chance. Attendees can take two free one-way trips on the Fourth Friday water taxis to and from the Tampa Bay History Center, Curtis Hixon Waterfront Park and The Straz Center for Performing Arts from 5 – 8 p.m. Pirate Water Taxi service is also available during the event at the company’s regular fee.

Coast Bikes are also available to event attendees courtesy of the Tampa Downtown Partnership. First time users can use promotion code “FourthFriday2016”  at       bit.ly/coastpromo for a free hour of bike access to travel between locations during the event.

Megan Myers can be reached at megan.myers@spartans.ut.edu

There was an error retrieving images from Instagram. An attempt will be remade in a few minutes.